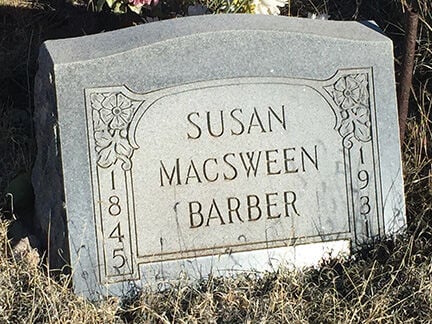 On the morning of July 18, 1878, Susan McSween stood across the road from her home as the Lincoln County War approached its climax. The Dolan/Murphy gang had her husband, Alex McSween, surrounded in their house. Ten men were inside including Billy the Kid and the rest of McSween’s self-named “Regulators.” Not only that, the house was now on fire. Alex McSween decided to give himself up and walked out the front door unarmed. He was shot five times and killed where he stood. The Regulators escaped in a dash for the riverbank and cover. Billy the Kid was the last one left inside the burning house, and with the roof collapsing around him, he came out the front door — bullets blasting from six-guns in both hands…and he escaped, at least for now.

A young Susan McSween saw her husband murdered that morning. Seeking to jail her husband’s murderer, she later hired a lawyer to pursue justice in the courts. He too was killed: gunned down by the Dolan/Murphy mob. Two years later, the widowed McSween married a young law clerk named George Barber who worked for rancher John Chisum. Chisum gifted 40 head of cattle to the new Mrs. Barber. Susan’s marriage to Barber didn’t last, but her interest in cattle did.

By 1890, ten years after she remarried, Susan McSween Barber had 5,000 head of cattle sporting her Three Rivers Cattle Co. brand on her 1,200-acre ranch. By the mid-1890’s she had become one of the largest land holders in New Mexico. She was known far and wide as the Cattle Queen of New Mexico.

She was, in fact, famous — even as far away as the east coast. A New York newspaper had this to say about her: “Near the town of White Oaks, New Mexico, lives one of the most remarkable women of this remarkable age…” adding how her huge ranch is managed entirely by her. This included building a dam across the Three Rivers stream and running a half-mile ditch to her rangeland. It also included building her own adobe house.

Her story started in the town of Lincoln. Several buildings from that period still exist as well as an interesting museum about Billy the Kid and the Lincoln County War. Susan McSween Barber died in 1931 at the age of 85. She is buried in the White Oaks cemetery.

Jon Knudsen is a freelance writer and retired educator. Email him at  johnny_mango@yahoo.com.

Welcome to the discussion.

Keep it Clean. Please avoid obscene, vulgar, lewd, racist or sexually-oriented language.
PLEASE TURN OFF YOUR CAPS LOCK.
Don't Threaten. Threats of harming another person will not be tolerated.
Be Truthful. Don't knowingly lie about anyone or anything.
Be Nice. No racism, sexism or any sort of -ism that is degrading to another person.
Be Proactive. Use the 'Report' link on each comment to let us know of abusive posts.
Share with Us. We'd love to hear eyewitness accounts, the history behind an article.

Sorry, there are no recent results for popular images.

Sorry, there are no recent results for popular videos.

Sorry, there are no recent results for popular commented articles.

We're always interested in hearing about news in our community. Let us know what's going on!